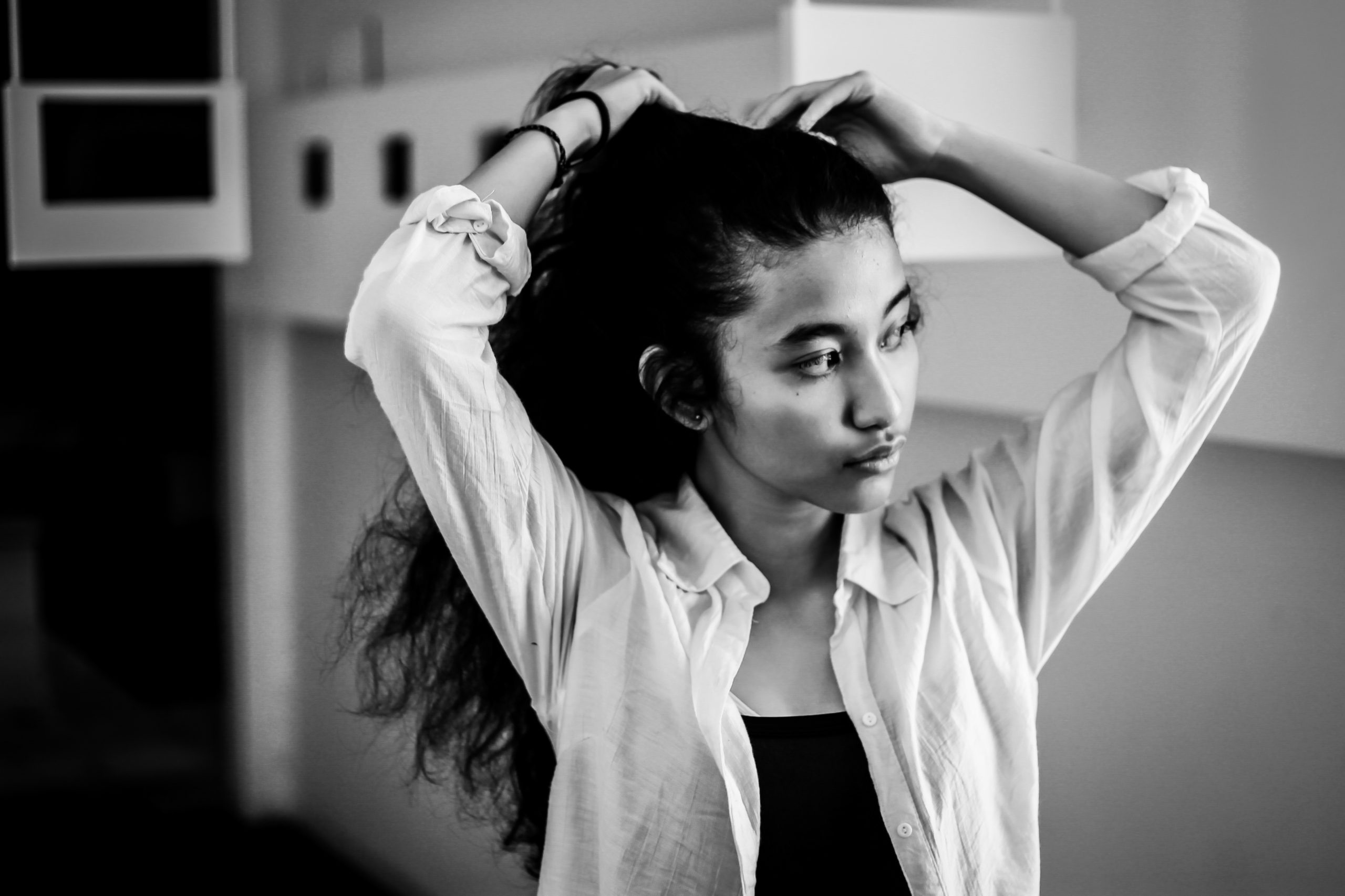 Pronounced as “trik-o-til-o-MAY-nee-uh”, trichotillomania is a hair pulling disorder than often results in bald patches which cause significant distress for the person who experiences them. They can go to great lengths to hide these bald patches, caused by pulling their hair, and often suffer in secret. It can interfere with social life and even work life as they can feel like they need to hide from the world when their bald patches are too visible to disguise easily.

Trichotillomania, sometimes called hair pulling disorder, is a medical condition that involves recurring, overwhelming urges to pull out hair from your eyelashes, eyebrows, scalp or other parts of your body.

Trichotillomania used to be classified as an impulse control disorder but is now considered an obsessive-compulsive related disorder (OCD) in the latest version of the Diagnostic and Statistical Manual of Mental Disorders Version 5 (DS-5, American Psychiatric Association). It is considered by many professionals to be body focused repetitive behaviour (BFRB), similar to nail biting.

For people trying to stop long term hair pulling, it can be helpful to view it in the same light: an unwanted condition you have the power to overcome once you find techniques that work for you.

If you’re researching into trichotillomania for a friend or family member who suffers from it, it’s important to keep in mind that it’s not as easy as just “stopping”. It’s a serious deep-rooted condition that requires a lot of help to overcome – often in the form of cognitive behavioral therapy and habit reversal techniques taught by a qualified therapist who has experience in treating trichotillomania.

People with trichotillomania have varying levels of it. For some people, it’s mild enough to just be a slight inconvenience. But for others, the ongoing intense urges to pull their hair can feel devastating – particularly when the effects of trichotillomania have such a visible effect on their physical appearance.

Symptoms of trichotillomania include:

At what age does Trichotillomania start?

You’re most likely to develop trichotillomania between the ages of 10 and 13 years old. Younger infants can also suffer from hair pulling but this is usually mild and goes away without treatment.

If you’re the parent of a child or teenager with this condition, it’s important to handle the issue delicately. Read this post with the 16 Things Parents of Children With Trichotillomania Need To Know

Is Trichotillomania an anxiety disorder?

Trichotillomania is not considered to be an anxiety disorder, so it does not fall into the same category as panic disorder, social anxiety and PTSD. As with many body focused repetitive behaviours, hair pulling can sometimes be a coping mechanism for anxiety but this is not always the case and there are much more complex factors involved.

It’s not known for certain what causes this condition, but experts believe it’s likely a combination of genetic and environmental factors.

Some of the theories around factors that increase the risk of developing trichotillomania include:

Genetics/Exposure: If you have an immediate family member with trichotillomania, you’re more likely to develop it yourself.

Stress: High stress levels may trigger hair pulling in some people, particularly if they’re within the typical starting age range of 10 – 13 years old.

Other disorders: Many people who have trichotillomania also have other disorders, such as depression, anxiety or obsessive-compulsive disorder (OCD)

People with trichotillomania are usually affected by 2 different “styles” of hair pulling, with the urge to pull their hair falling into these two different categories. The same person might do both types, sometimes on the same day or sometimes in phases months apart.

Deliberate hair pulling: This type of hair pulling is usually precedented by an overwhelming urge to pull, and a strong feeling that specific hairs or hairs in a specific area need to be pulled out. When experiencing this type of urge to pull, the person can’t concentrate on anything else until they’ve succeeded in pulling out the “right hairs”.

Absent-minded hair pulling: This type of hair pulling is usually done while the person is doing something mindless such as watching TV or reading. They often don’t notice they’re doing it until they suddenly snap out of this trance-like state and realize they’ve been pulling their hair out.

It’s quite common for people with this condition to start with only deliberate hair pulling in the early phases of their condition, then gradually incorporate more absent-minded hair pulling over time as the habit becomes more deeply engrained in their routine.

Certain physical positions or actions might trigger a hair pulling episode, such as touching their eyelashes or brushing their hair.

The Emotional Aspect of Trichotillomania

There is a huge emotional component to this condition, and it’s very complex. People with trichotillomania often experience a rush of conflicting emotions in quick succession, and this can contribute to increased levels of anxiety and depression in many people.

Positive Emotions: During an episode of deliberate hair pulling, the relief and release of built-up tension upon pulling out the “right” hair leads to a rush of endorphins which result in positive feelings. They can feel happy, accomplished, relieved, relaxed and calm immediately upon pulling out their hair.

Although the causes of trichotillomania are unknown, the main trigger precluding the urges to pull hair is usually touching the hairs. This might be the twisting of hair, or circling a fingertip against the tips of eyelashes, or stroking the eyebrow hairs in the opposite direction to their growth. What often happens is that the person will feel a hair that seems “different” to the rest (usually thicker or stronger), and the urge to pull it out will begin the hair pulling session. Sometimes the person will be able to relax once “the offending hair” has been pulled out, but as with most body focused repetitive behaviors this can continue to the point of noticeable hair loss.

Can Trichotillomania be cured?

If you think you have trichotillomania, it’s always a good idea to speak to your doctor who can give you an official diagnosis and refer you to an experienced cognitive behavioral therapist.

Do not get discouraged if you don’t stop pulling right away, or the urge to pull comes back temporarily after a period of being pull-free. Once you start treating your trichotillomania, the coping mechanisms and techniques will eventually become automatic habits to you and it will be increasingly easier to stop pulling out hair in the long term.

What type of people have trichotillomania?

You’d be surprised at how many people have trichotillomania – it’s estimated that between 1-2% of the population has it! It affects people of all races, socio-economic backgrounds, ages, professions, and locations. It even affects supermodels: Victoria’s Secret Angel, Sara Sampaio, opened up about her trichotillomania on Instagram.

If you suffer from trichotillomania, it’s important to not let the condition define you. You are beautiful and amazing with or without hair – your skills, personality, and the way you treat others are what make you YOU and no amount of hair pulling will ever change that. People love you for who you are, not how much hair you have.

It’s easy to fall into feelings shame and embarrassment when you have visible bald patches, but try telling yourself that they are just skin. Seriously, bald patches are just skin! You have so much skin on display on the rest of your body, what difference does a bit more visible skin make? There’s no hair police enforcing some kind of global rule that we all need to have hair in exactly the right places.

Yes, it might be a bit annoying to fill in your eyebrows or put on false eyelashes or a wig. It’s an inconvenience, for sure. But don’t feel shame around it – think of it as being just one extra step in your daily routine. Or if you feel ready, go out without covering your bald patches up! You’ll soon notice that people out there in the world are too busy worrying about themselves and their own lives to care about whether you have all your hair or not.

Got trichotillomania? We'll be accepting new members to GROW in late July 2020!

Thanks for signing up! You'll be the first to know when we're accepting new members.